Inspired by the rooted traditions, modern vision and the cosmopolitan structure of Istanbul that has embraced so many civilizations; NISHANE is ready to be the indicator of the value you put on yourself and your loved ones with unique and sophisticated fragrances and elegant touch of its artistic collections designed with utmost care.

EGE / ΑΙΓΑΙΟ is a tribute to the Aegean Sea – an elongated embayment of the Mediterranean Sea located between the Greek and Anatolian peninsulas – that has been historically important, especially in regard to the civilization of Ancient Greece, which inhabited the area around the coast of the Aegean and the Aegean islands. The Aegean islands facilitated contact between the people of the area and between Europe and Asia.

EGE is the Turkish name for the sea which was derived from the Greek name ΑΙΓΑΙΟ. Having both names together as the name of the perfume (EGE / ΑΙΓΑΙΟ) is a deliberate choice by NISHANE in order to pay tribute to the shared skies and culture by Turkish and Greek people who are the neighbouring residents of the Aegean costs which – as Herodotus said – a world of summer sea-breeze, deep blue waters with every pebble on the bottom clearly visible, towns and villages full of houses painted white and blue, a common bond of cuisine, shared instruments and lyrics having a feeling of nostalgia mixed with hopefulness, a cohabitation and interdependence of centuries.

“Blue is the colour of longing for your most beautiful dreams in this blue world and enjoy sharing the glamour of being able to see the same charming blueness no matter from which part of the see you look at it.”

Ilias Ermenidis, a native Greek, discovered perfumery at his father’s flavours and fragrance factory in Istanbul. He studied perfumery in Paris and was the first perfumer trainee hired by Firmenich from ISIP. After ten years living between Paris and Geneva, he moved to New York, where he has been thriving for 25 years. His early successes included fragrances for Avon, Coty, Oscar de la Renta and Victoria’s Secret. Ilias has also created perfumes for Givenchy, Ferragamo, Vera Wang, Gucci, Bath & Body Works, Michael Kors and Calvin Klein. 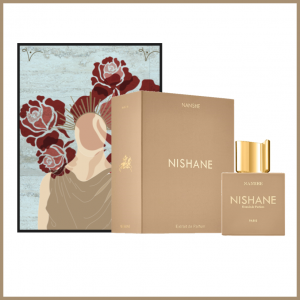 NANSHE is the name of a Sumerian goddess of fertility, water and social justice, which was believed to be the patron of dreams and prophecy. She watched over orphans and widows, oversaw fairness, fresh water, birds and fish, fertility and favoured prophets, giving them the ability to interpret dreams accurately.

Together with the perfumer Cecile Zarokian, the main challenge was to create a scent that reflects the kind, compassionate, welcoming and wise attributes of this divine figure. It is aimed to bring fertility for more positive vibes and souls to make the world a better and fair place to live. A world where the forgotten, the poor, the lonely, and disenfranchised are looked after.

Surrounded by a sublime accord of rose which had been widely resorted to help fertility by many civilizations, NANSHE is suggesting poetic emotions with the earthy aromas that will mystically conceive the positiveness even in the darkest times.

“Be the patron of dreams and prophecy.”

As the perfumer of NISHANE’s iconic scent ANI (launched in 2019), Cecile Zarokian is a Paris-based independent perfumer who founded her company in 2011. She has created over a hundred fragrances for various brands in the European and Middle East perfume markets. In addition to her creation skills as a perfumer in fine fragrance, homecare and body care, Cecile works with international brands as a consultant in scent branding, helping them to create and develop their olfactory identity. Her scent marketing expertise leads her to design multi-sensory experiences for unique events and activations.

Would you like to know more about NISHANE? You will find more information on the NISHANE brand page.

Today we’re talking spring!   Finally, the dark days are over and spring has…

We are proud to announce the launch of the new brand: Dusita. Dusita is an…

This website uses cookies to improve your experience while you navigate through the website. Out of these cookies, the cookies that are categorized as necessary are stored on your browser as they are essential for the working of basic functionalities of the website. We also use third-party cookies that help us analyze and understand how you use this website. These cookies will be stored in your browser only with your consent. You also have the option to opt-out of these cookies. But opting out of some of these cookies may have an effect on your browsing experience.
Necessary Always Enabled
Necessary cookies are absolutely essential for the website to function properly. This category only includes cookies that ensures basic functionalities and security features of the website. These cookies do not store any personal information.
Non-necessary
Any cookies that may not be particularly necessary for the website to function and is used specifically to collect user personal data via analytics, ads, other embedded contents are termed as non-necessary cookies. It is mandatory to procure user consent prior to running these cookies on your website.
SAVE & ACCEPT